In a previous post (14 Jan 2012), I reported on the first stages of a project to convert an abandoned children’s play area into a community garden:
http://sfnottingham.blogspot.com/2012/01/creating-community-garden.html 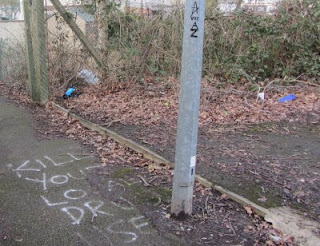 I will be posting regular updates on the Dinas Powys Community Growing Area, to keep residents of Dinas Powys informed and to help others seeking to transform wasteland into places where communities can grow their own food.
This project was initiated by Elizabeth Millard (Chairperson of the Dinas Powys Residents Group) and Councillor Keith Hatton (Plaid Cymru). They organized a second meeting on Saturday18 Feb at Murchfield Community Hall in Dinas Powys to discuss progress.
Rob McGhee is one of twelve Rural Regeneration Officers working for Creative Rural Communities (an initiative led by the Vale of Glamorgan council). He is in charge of Community Grown Food Projects (areas covered by other Officers include tourism, farm diversification, cycleways and footpaths). Rob was approached by Elizabeth and Keith a few months ago, and agreed that the Dinas Powys project would be ideal for Creative Rural Communities involvement. If you live outside the Vale, check to see if your local Council has an equivalent initiative. 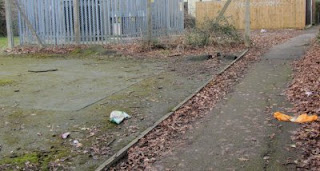 Rob arrived at the meeting with plans he had drawn up for the site. The 940 square metres has been officially designated a ‘Community Growing Area’ on the plans and will have communal spaces and also individual plots. The larger plots will be a substantial 12 by 5 metres, while there will be a range of smaller ‘starter’ plots (with flexibility built in as larger plots can be subdivided). There will be some deep beds, which are easier for the elderly and infirm to cultivate. Wheelchair access will be provided, so slab paths will be laid at the entrance and around the site. The council agreed that an adjacent overgrown and abandoned council house garden could be incorporated, with the removal of a bramble-covered fence.
There will be one large communal storage shed for equipment (although individual lockers could be located within this shed). Keys to the double gate in the security fence will be supplied to local residents who garden plots, while a rota system will be established for caretaker keyholders to open the garden during certain hours of the day to allow access to everyone in the community. 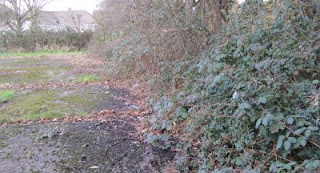 Creative Rural Communities will supply funding to get the project started, although grants from other sources will be applied for to meet the full costs. The main source of additional funding is likely to be Tidy Towns (a Welsh Government initiative, described in the previous post). Rob will also help organize a community clean-up work party, to work alongside members of the local community in getting the site prepared.
Publicity is another area where Creative Rural Communities can provide assistance. More publicity is required in Dinas Powys, on the aims and timetable of the project, and on the specific inconvenience it may cause during the establishment phase. Due to the presence of contractor’s vehicles, for instance, the footpath between Nightingale Place and Sir Ivor Place will need to be closed for at least a month.
On the ground, three different contractors have already visited the site and given estimates for the costs of land clearance, removing the old wire fence, putting up security fencing, and supplying topsoil. Estimates of costs have been in the same ballpark, with one of the contractors having recently done a similar job in nearby St Andrews Major. 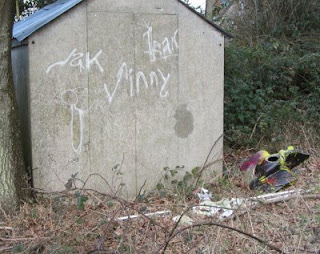 The meeting discussed a range of other issues, which may be relevant to similar projects. These including the need to cut hedges before birds start nesting, the determination of where cables lie under the soil (there is an adjacent electrical substation in this case), getting local schools involved, bringing water and electricity onto the site, and establishing a communal compost area. In the Vale of Glamorgan, compost is made from the Council’s kitchen waste roadside collection and is available for free if collected from the Cowbridge recycling plant (see link to previous post on recycling below). 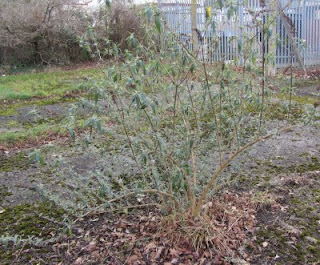 Because this is a community garden and not a statutory allotment, there will be fewer restrictions on what can be done with the food (e.g., only a small proportion of food grown on an allotment can be sold). This makes for more flexibility and opens the possibility of regular produce sales, either on-site, at the Village Show, or via local shops and farmers markets, with some of the money feeding back into this project and other community activities.
At the meeting, Rob also handed out leaflets “fresh off the press” for Community Foodie: a new project (within the Creative Rural Communities sphere), that will be officially launched in March 2012, to identify, develop and support community food growing in the rural areas of Bridgend, Torfaen and the Vale of Glamorgan. I will post on that, along with further developments in the Dinas Powys Community Growing Project, at a later date. 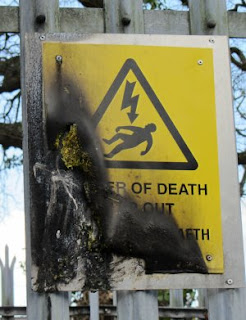 As these photos (which I took this morning) illustrate, a community garden should greatly improve the environment in this area; turning it from an ugly space where underage drinkers and drug users hang out, into a place that brings the community together by providing a recreational meeting place and a source of locally-produced food.
The next project meeting at Murchfield Hall will be in late April or early May.
On the current schedule, Elizabeth, Keith and Rob are hopeful that the contractors can start work on the site sometime later in May.
Further information:
Creative Rural Communities is a regeneration and economic development initiative, led by the Vale of Glamorgan Council in partnership with various public, private and voluntary sector organisations.
Creative Rural Communities
The Old Hall, High Street, Cowbridge, Vale of Glamorgan CF71 7AH
http://www.creativeruralcommunities.co.uk/
http://www.valeofglamorgan.gov.uk/working/regeneration/rural_regeneration.aspx

Free compost from kitchen waste (and how to obtain it in the Vale of Glamorgan):
http://sfnottingham.blogspot.com/2012/01/co-mingling-in-vale-of-glamorgan.html
Posted by Stephen Nottingham at 12:55