In this blog strand, I am following the progress of Nightingale Community Garden in Dinas Powys, from the very first planning meeting to completion and beyond. I am doing this as a source of information for local residents, but also in the hope that it will be useful to those planning similar ventures in other areas. The contractors first arrived on site, at the time of my previous post, last month.

The first contractors on site were Acorn tree surgeons. They spent a couple of days cutting trees. These were cut into logs or turning into wood chips. A couple of larger logs were retained, to be made into benches. 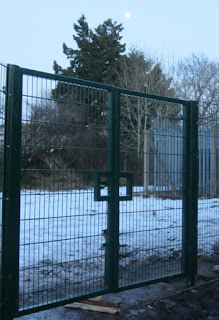 The main contractor, Gerald Davies Ltd, started work on 22 January. The first job was to erect the security fence alongside the footpath, including the double gates that will provide the main access to the site. Work was delayed by poor weather conditions and was expected to last for about a month. 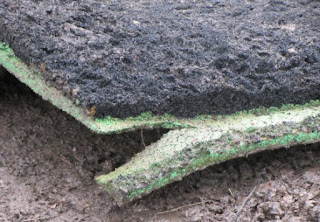 On 28 January, the contractors started taking up the rubber surface on the former play area. The rubber was, in places, up to 3 inches thick. Once removed, it revealed where the swings, roundabouts and other play equipment was fixed into the concrete. 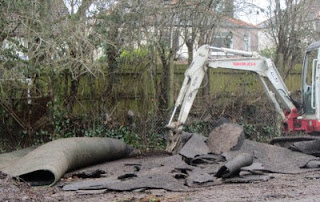 The next day, Gerald Davies and his small team started breaking up the concrete. The concrete was piled up for removal by dumper truck at a later stage (down a temporary track to a skip on Sir Ivor Place). 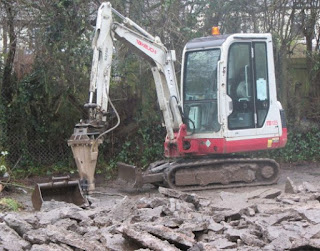 They also removed the fence between the two parts of the site, so the full extent of the garden could be seen clearly for the first time. A new wooden fence was erected along the boundary with a neighbouring garden. This will be extended in front of the concrete shed and will eventually join the new metal fence by the footpath. 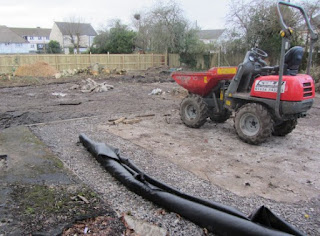 On 7 February, a drain was dug along the back of the site. 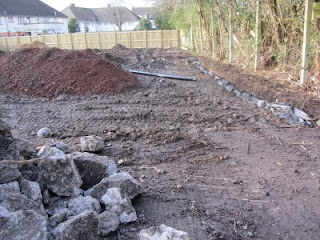 Today, a trench for the mains water pipe was being dug. The mains water will come from Sir Ivor Place and go across to a tap near the electrical sub-station (where a communal shed will be built). 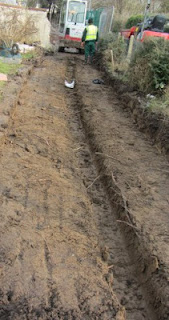 The mounds of gravel currently on site will shortly be used to form a temporary track (above, after the water pipe trench is filled), for taking out the broken-up concrete and bringing in the topsoil. The topsoil is currently scheduled to arrive early next week. 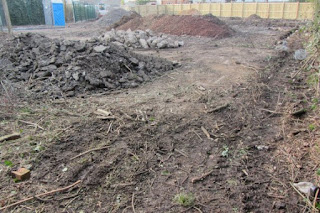 A site meeting for those interested in having a plot in Nightingale Community Garden (which will also be opened at certain hours for general recreational use) has been scheduled for 10am on Saturday 2 March, when the layout of the garden should be clear.


Here is the Nightingale Community Garden logo, designed and painted by Merry Metcalf:

Posted by Stephen Nottingham at 17:13