I am chronicling the creation of a Community Garden on an area of derelict land (an abandoned play-area) between Sir Ivor Place and Nightingale Place in Dinas Powys.

Since the previous post, there has been a clearance day, the garden has been officially named, and contractors have started work on the site.

To recap, the project was initiated by Elizabeth Millard (Chairperson of the Dinas Powys Residents Group) and Councillor Keith Hatton, and is supported by Creative Rural Communities (through their Community Foodie project) with Rob McGhee being the Rural Regeneration Officer involved. Most of the funding for the project has come from Tidy Towns Wales. 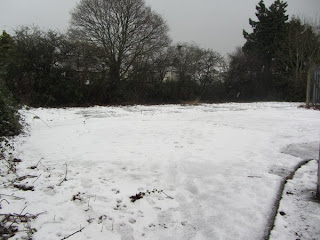 On Saturday 10 Dec 2012, a group of volunteers assembled to do some clearing up. This provided the first opportunity for hands-on work at the Community Garden, as the land has now been officially leased by the Vale of Glamorgan Council to the Dinas Powys Residents Association (for an initial period of ten years). Here is a photo of some of those who took part. 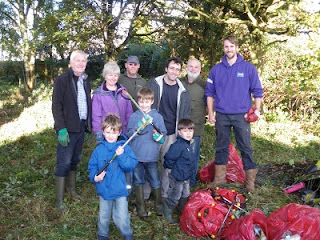 At a meeting on Monday 7 January at Youldon House a name was agreed: Nightingale Community Garden. A number of details were discussed, at this and at a subsequent meeting on Monday 21 January, including plot size, site security and plot holder agreements. In addition to being an area were the community can grow its own food, the garden will include a recreational area with seating.
Merry Metcalf and Giles Metcalf, between them, have designing a logo for Nightingale Community Garden, conducted an information mail-drop to local residents, established a Facebook page and an email address for the project (see below), and helped adapt an existing Plot Holder Agreement (tabled by Rob at a meeting) for discussion.
On Monday 21 January, Acorn tree surgeons removed trees from part of the site. The logs and wood chips will be used in the garden; for instance, some of the larger logs will be used for benches. 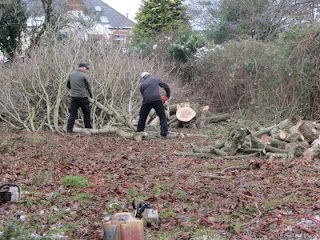 Gerald Davies, the main contractor, arrived on site for the first time on Tuesday 22 January. They knocked down a wall to allow access to the site (the wall will be rebuilt) and today (23 Jan) started to erect fencing. This stage of the project will take about four weeks and will also involve the breaking up and removal of hard-core and rubber surfaces, the laying of paths, marking out plots and building deep beds, and the arrival of topsoil and compost. 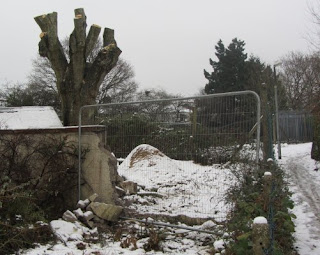 There will be an opening day in the spring (further information to follow). I’ll post again soon, with more photos, as Nightingale Community Garden takes shape.